Writing this post was not an easy job. There are so many tasty Transylvanian cakes that limiting myself to three was hard. So I have included my personal favorites in no particular order. My strong recommendation is that you should try at least those three your on next trip to Transylvania. 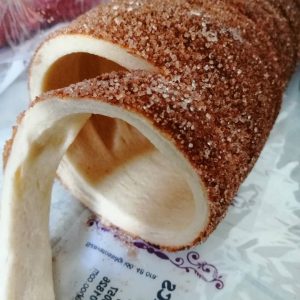 Kürtőskalács (Chimney Cake) is one of the best known Transylvanian cake. One of the earliest recipe of this cake can be found in the cookbook of Countess Maria Mikes of Zabola written in 1784. With a shape resembling to a chimney and a heavenly taste, Kürtőskalács is today is part of the culinary pride of the Szeklerland (Eastern Part of Transylvania inhabited mostly by Hungarian Szeklers).

It is made of  sweet yeast dough (raised dough) roasted  above an intense source of heat (usually charcoal) after previously been wrapped around a cylinder–shaped baking spit and covered in granulated sugar. 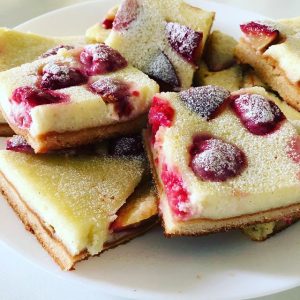 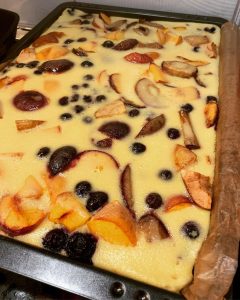 Another timeless classic among Transylvanian cakes is Lichiu or Hencles, this one belonging to Saxon heritage of Transylvania. Traditionally it was cooked in the wood-fire bread oven after the baked breads were done and the oven was still warm.

It is a simply yet extremely tasty pie is made up of a bread base topped with a sweet creamy mixture and sometimes fruits, usually plums.

There are mainly two variation for topping, both of them delicious, one with semolina flour and plums and another one with cow cheese and cream. Being a desert mostly cooked at home for centuries many cooks refined their own recipe, so if you`ll fell in love with Lichiu do not be surprised to find countless versions of it. 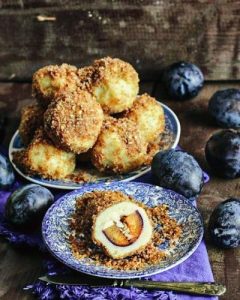 Plum dumplings are an early autumn desert cooked usually in that time of the year when the plums are harvested for “palinka” (Transylvanian home made brandy). It is mouth watering simple local desert and there are great chances you have not heard of it if you have not lived in Transylvania or Romania.
They are very easy to make, plums are wrapped in a dough made of flour, eggs, oil, sugar, salt and mashed boiled potatoes and then cooked in  a simmering water for around 5 minutes.

If you liked this article and fancy a Transylvania tour with with a strong culinary accent do not hesitate to drop me a line here.