An Orthodox Tour of Romania offered as a true immersion in the Orthodox monastic life is an idea very close to my heart because I am a devoted Romanian Orthodox Christian. My country is not small, with almost 240,000 square kilometers, it is similar in size to the U.K. or the State of Oregon in the U.S. According to the latest census data, an extraordinary 87% of Romania’s 20 million inhabitants classified themselves as Orthodox Christian.

This is particularly impressive because unlike other Orthodox countries–like Russia, Ukraine, Greece and Bulgaria–Romania uses a Latin-based language that is similar to Italian. Because of this and Romanian’s unparalleled hospitality, travelers are likely to feel “at home” here in Romania more than in any other Orthodox country in the Eastern World.

There are currently more than 650 independent Orthodox Christian monasteries in Romania, and that number is growing as the country embraces a revival of faith after 50 years of Communism. Because of the staggering volume of monasteries, all my attempts to design an itinerary for this unique tour left me frustrated with the exclusion of so many worthy monasteries.

In the end, I decided to make a list that focuses on the unique history and defining traits of the ten most important Romanian Orthodox monasteries. Clients can then prioritize and choose which ones to visit depending on preference and travel logistics, and I will customize a trip that accommodates your preferences. Although I can custom-tailor your itinerary, I recommend a minimum of four days/three nights for the Orthodox Tour of Romania.

Voronet Monastery
Widely known as the “Sistine Chapel of the East”, it was built in 1487 in less than four months at the order of the Stephen the Great, as a offering for God`s grace in helping him defend his country against the Ottomans. The Voronet Monastery is also famous because of its original outside fresco painted with predominant unique blue color. Since 1993 is par of UNESCO World Heritage.
See Movie 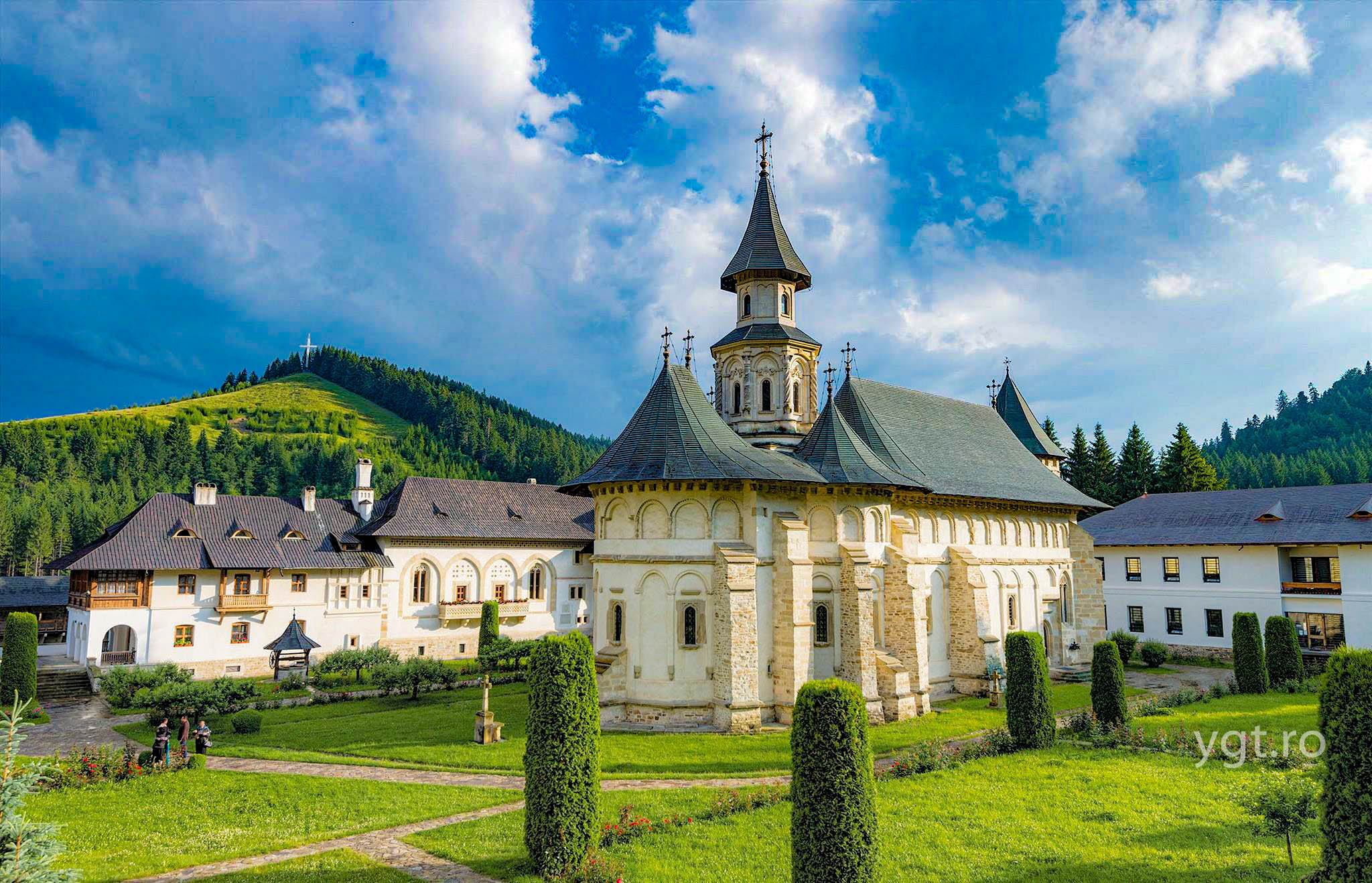 Putna Monastery
Considered the “Jerusaleem of the Romanian people” Putna Monastery is the most important foundation of Stephen the Great. It was built also in Moldavia region of Romania between 1466 and 1469 as his future burial place where his tomb is venerated by pilgrims untill today. The monastery church is dedicated to the Dormition of the Theotokos (August 15) and it is one of the most important religious, spiritual edifice of our country.
See Movie 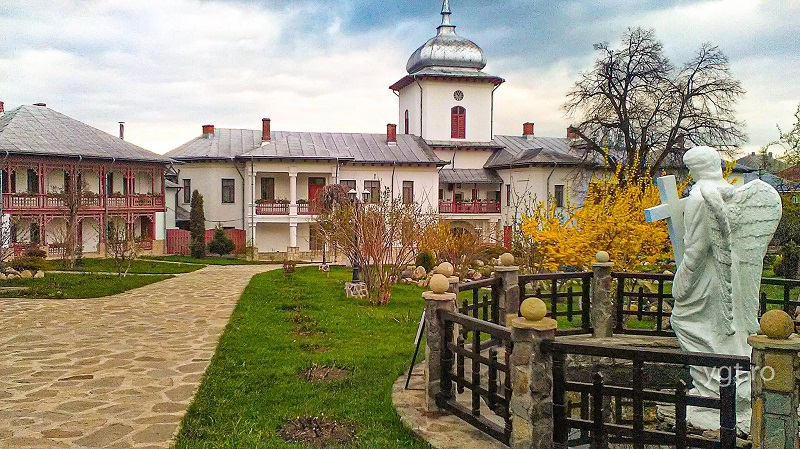 Varatec Monastery
Built between 1808 and 1812 in a blend of Neo-Classic with Neo Byzantine architectural style, Varatec Monastery is home to over 400 nuns who live in independent houses scattered arround the monastery. Located in a scenic natural landscape, with a museum of medieval Orthodox artefacts and studios for monastic fabrics, painting, embroidery and carpets, Varatec Monastery makes a perfect place to accommodate for at least one night.
See Movie 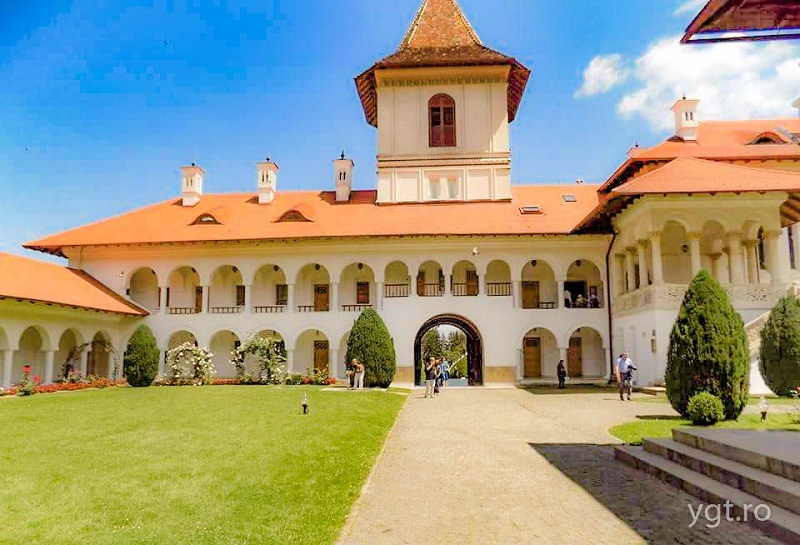 Sambata-de-Sus Monastery
It is a Transyvanian monastery founded by a Vallachian Ruller, Constantin Brancoveanu between 1696 and 1701. The monastery was an important support for Romanian Orthodox population of Transylvania rulled by the Habsburg family who pressured Romanian Orthodox to embrace Catolicism. Located on a picturesque enviroment at the foothill of the Carpathian Mountains, on the valley of Sambata river,  this monastery is a must see.
See Movie 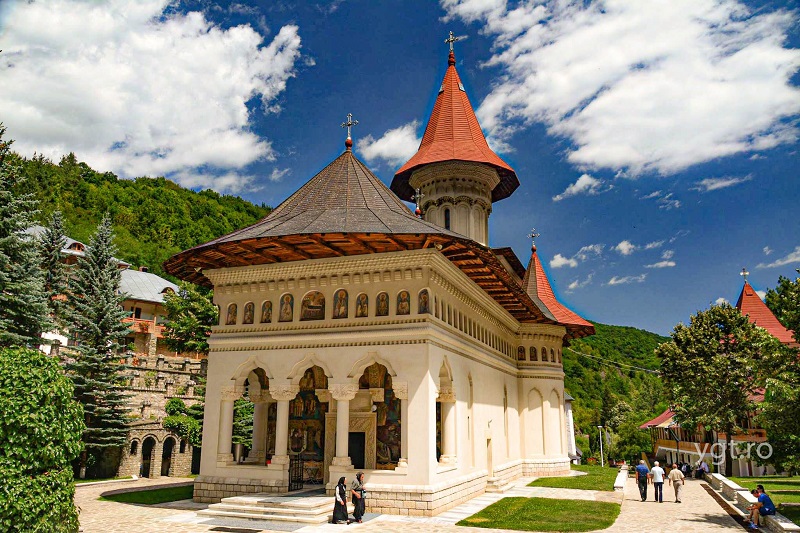 Ramet Monastery
Founded in 1214 and dedicated to the Nativity of Mary and the Healing Fount, Ramet is one of the oldest monasteries across Romania. It is often called by Romanians as “Garden of heaven  in the Apuseni Mountains”.
See Movie

Curtea-de-Arges-Monastery
Curtea de Arges Monastery is maybe the most important Orthodox spiritual landmark of Southern part of Romania. Built over 500 years ago the Cathedral of the monastery has a unique architecture blending Byzantine and Ottoman styles. Resembling more with a mosque than with an Orthodox cathedral this site is a must see for the ones interested in centuries old religious sites. Last but not least at this Monastery one will be able to venerate the relic of Saint Philothea of Arges, the Protectress of Romania.
See Movie

Hurezi Monastery
Founded by Constantin Brancoveanu between 1690 and 1697, Horez Monastery it is considered as the most representative architectural building for the Brancovan style. This architectural style it is the only one considered Romanian and it is a blend of Venician and Oriental influences. Since 1993 this monastery belongs to UNESCO World Heritage.
See Movie 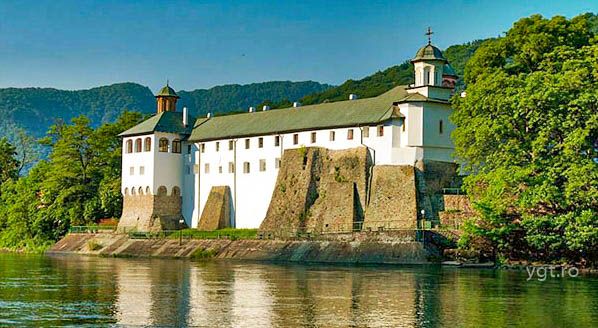 Cozia-Monastery
Founded by Mircea te Elder and built between 1386 and 1388, Cozia Monastery lies on the bank of the River Olt. You can admire here one of the most beautiful example of religious architecture in Romania along with parts of the original frescoe, over 600 years old.
See Movie

Barsana Monastery
First record of a monastery on this place dates back to 1390, the current church, 57m high, was built in 1711 entirelly of wood. It is one of the most beautiful monasteries in Maramures, being visited daily by hundreds of pilgrims, but also tourists from both the country and abroad. It is definitely a place that should not be missing from any itinerary through Maramures.
See Movie 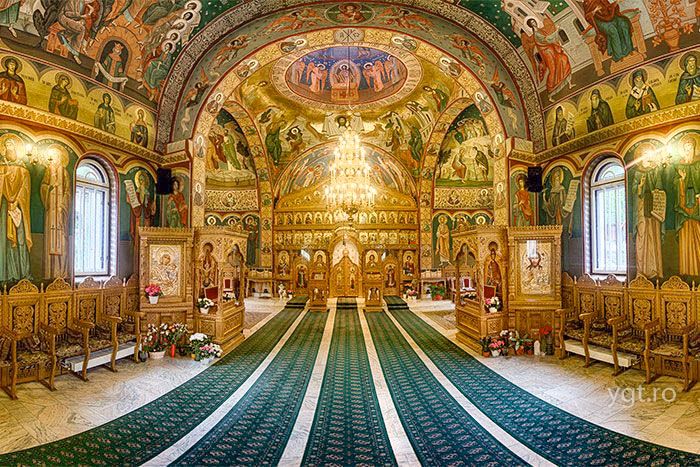 Sighisoara Monastery
Founded in 1997 and located in a scenic natural area surrounded by dense forests, Sighisoara Monastery dedicated to Saint Demetrius of Thessaloniki. This saint is  revered as one of the most important Orthodox military saints, often paired with Saint George and celebrated 26 October for Eastern Orthodox Christians following the Gregorian calendar and 8 November for those following the Julian calendar.
See Movie

Discover Eastern Orthodox spirituality along with a private Orthodox guide, knowledgeable in church history and church traditions and a private car..

Get in touch
Call now